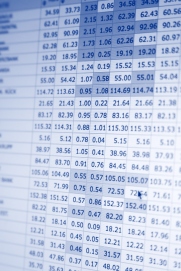 Very often presentations will include financials or other figures. And, of course, the presenter believes that the best way to present this data is by cramming as much as he can into a gigantic Excel spreadsheet and then copying and pasting that 6,250-cell spreadsheet onto one small PowerPoint slide. Impressive, right? Think again, presenter… this has zero impact. And, it will even distract from your presentation because people will lose focus as they won’t be able to see what you are referring to and follow along.

Spreadsheets are used for analyzing, not for communicating. They are fantastic for quickly figuring out totals or averages or for doing hundreds or even thousands of calculations instantly on rows and rows of data. They are not, however, great for presenting. Simply put, they contain way too much information. My advice is to simplify: do you really need to present all of the data? Or just the results?

By focusing on the results in some sort of summary fashion like a table, the audience can see the numbers big and clear. You can explain how you arrived at each number if you see fit. You can walk them through it step by step but you don’t need to show the entire process. Use colors, percentages, underlining, boldface, and other effects to highlight key figures or show comparisons or differences within the results. With a summary table you have a powerful, focused image that you can now play around with and be creative.

In the end, the audience will remain more focused and in tune with your presentation and you will be able to get your point across more succinctly and effectively.

It may not be your first choice and you know the audience is going to hate you for it, but sometimes you have to present numbers, figures, calculations, results, financials, statements, and more. While it certainly makes it more enjoyable and digestible for the audience if the numbers are positive and show growth, profits, or bonuses, the reality remains that most people don’t like looking at numbers in a presentation and tend to tune out. A surefire way to lose the audience is to pop an Excel spreadsheet up on the screen and begin talking.

A spreadsheet is dull, difficult to follow, and not meaningful to an audience. Next time you have the task of presenting numbers, try using something visual. Try a pie chart to show proportions, such as sales by company division as a part of the whole company. Use a line chart to show a trend, such as profit growth over the last four quarters. Or, put together a bar chart to compare expenses over the last 12 months. These graphics are simple to build and create something digestible and understandable for your audience.

Take this one step further, though. The default in PowerPoint is for the visual to show up on the screen in one piece. However, you can animate your charts and graphs and build them along with the audience. This gives you time to discuss each piece as you go along. You can explain why something may have happened or congratulate a group on a great quarter as your line chart shoots to the sky. If you do this, keep the effects simple – we don’t need spinning and twirling. Keep in mind you don’t want to detract or make a serious presentation cartoonish.

So, next time you are faced with the daunting task of presenting financials, spruce it up a bit and you will see it is much more enjoyable for the audience, and they will both understand and retain what you have presented much better.